(1)  CITY TRAFFIC MAY COME TO A STANDSTILL, BUT THE BICYCLE MAINTAINS PROGRESS 25 December 1998 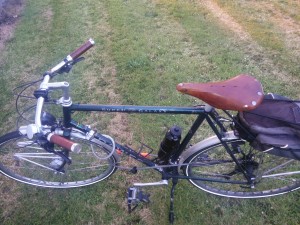 Even for couch potatoes, the humble bicycle became a source of excitement as the Tour de France rolled through Ireland.  The great race focused public attention on the two-wheeler as a speedier way to get to work and persuaded transport planners to see it as a solution to unrelenting gridlock, writes
Colman Cassidy.

There is no escaping the reality: the humble bike must form part of the solution to Dublin’s traffic gridlock.
Thankfully, John Healy, chief executive of the Dublin Transportation Office, DTO, is an enthusiast.  About £4 million will have been spent on the development of cycle lanes in the capital by the end of the year.
A 180km network of lanes is planned, with an additional £13 million earmarked to get all this up and running: “Each [Dublin] local authority is developing its own plan that will link into a strategic network.”
Cycles can go three or four times faster than a pedestrian, but use five times less energy in the process, according to Ivan Illich, one of this century’s most challenging social thinkers.
The bicycle, says Illich, can perfectly “match human metabolic energy to the impedance of locomotion”.  Equipped with this tool, he says, “man outstrips the efficiency of not only all machine, but all other animals as well”.
Since the 1960s the bike has been a forgotten icon, at least until recently.  But something of a “death-bed” conversion is discernible since the traffic planners have come to concede its strategic importance.
Henry admits that this has been something of a ‘Pauline’ conversion: “Some 12 engineers, including myself, who were involved in the Dublin Transportation Initiative, emerged from that process radically different in our outlook.”
He admits his current world view is not typical of the traditional road engineer: “I’m more interested in giving priority to the road user rather than the vehicle.”
In practical terms this means the DTO is actively promoting the bike culture as the second element of its transport strategy for Dublin, next to the quality bus corridors for getting commuters to and from work, quickly.
The Tour de France gave public consciousness of the bike’s utility value a major fillip.  The sight of so many superbly fit and bronzed athletes pushing themselves to the limit along Dublin’s wet and windswept cobblestones reawakened something in the couch potatoes.
A similar reaction overcame the thousands that turned out to line the approaches to the capital next day, as the peloton returned to Dublin, after the sprint through Wicklow.  By the third day, the country had taken the sport of cycling to its heart, as the race swept south through Sean Kelly country, en route to France.
The captive tripper and the reckless traveller are equally dependent on transport, Illich argues.  Neither can do without it. It follows that a few hours strapped into a high-powered car seat make one complicit in the distortion of human space, signalling assent to the design of the city’s geography around cars rather than people: “Man has evolved physically and culturally together with his cosmic niche.” If that relationship is determined by the velocity of vehicles rather than by the movement of people, Man the Architect is reduced to the status of a mere commuter.
The DTO blueprint is a comprehensive manual of cycleway guidelines developed in consultation with Dutch engineers, acknowledged experts in the field.
The central theme of the manual is the pre-eminence of the bicycle as a tool for the able-bodied commuter.  Hence, its strategic role in the overall DTO strategy. Implicit in this is the need for the education of motorists to establish without question the right of the cyclist to be on the road.
Dublin – and indeed, all Irish cities – are hazard zones for cyclists at all times, as the bruises picked up by this writer over more than 20 years of commuter cycling, can testify.
However, Dublin is beginning to take its cue from countries such as the Netherlands and Denmark, where the bicycle emerges as first among equals at traffic lights and road junctions.  But there is still a long way to go, Henry concedes, as he insists the number of cyclists in peak-hour traffic in Dublin will double before long.
Let’s start with the removal of parked cars from suburban cycleways, the latest source of apoplexy for the long-suffering bicyclist.
Commuter cycling is all very well, but what about the tourist?  That’s the sentiment expressed by TCD engineering graduate, Keara Robins, who returned to Ireland from Amsterdam six months with a business idea that has taken off.  Before that she had worked for Shell in the oil industry.
On her return she proceeded to set up Bike Tours, which shows mobile tourists the delights of medieval Dublin, from the cobblestones of Dublin Castle out to Kilmainham (Gaol and Royal Hospital).  Sounds delightful and it is.  But the absence of proper cycleways and a less than cyclist-friendly Galway road mean the bike convoy must take to the footpath for part of the return lap, to connect up with the national Museum at the former Collins Barracks.  And the crossing at Heuston station is particularly hazardous for the unwary.
“I’m very much in favour of what the DTO is doing,” says Ms Robins, who pays a high insurance premium for the public liability cover essential for her business.  “But these cycle lanes are all aimed at the commuter.  An holistic approach should be adopted to the city environment, which would cater for the tourist as well.”
In the Republic, she says, priority is given to front gardens and the exits from houses, rather than the cycleways running alongside.  This contrasts sharply with Holland where the bicycle has priority status.
The potential for tourist-friendly routes is enormous, she argues, along river paths adjoining the Dodder, Tolka and Camac, for instance, as well the two canals separating traditional Dublin from its outer suburbs.
The former oil engineer holds a passionate belief in the bike as icon.  But there is still some way to go, she concedes, before the golden age of cycling returns to our busy towns and cities.

The European Commission has formally reprimanded the Republic for failing to protect the country’s wild bird population and for not adopting and implementing a crucially important National Heritage Plan.
“On the basis of the information at its disposal, the Commission maintains its view that Ireland has failed to encourage research and any work required as a basis for the protection, management and use of the population of all the wild bird species suffering a decline in population and/or range as a result of changes to their habitats,” says the EC’s “reasoned opinion”, a legal document, which has been seen by The Irish Times.
In April last year the relevant Irish authorities – the Department of the Marine and Natural Resources and Dúchas, the heritage board, were invited in a “letter of formal notice”, from the Commission, to specify, “if they considered they had encouraged the necessary research and work” in relation to a list of wild birds under threat.
The letter charged that since 1981 Ireland had failed to classify “all the most suitable territories” for various species, contrary to Article 4 of the 1979 “Birds Directive”. It had also failed to establish the necessary legal protection regime for classified Special Protection Areas, SPAs, as specified by the directive. In addition, Ireland had failed to adequately transpose the terms of both this directive and the 1992 “Habitats Directive” – which provide for the assessment of plans likely to significantly affect SPAs – into Irish law.
The reply from the Irish authorities, dated May 30th 2000, did not provide any specific information on the wild life species listed in the EC’s letter. It affirmed, however, that Duchas had carried out research “either on its own or in conjunction with other bodies” and said Ireland’s National Heritage Plan, currently in the course of preparation, would “include a specific commitment to research, giving priority to habitats and species which are endangered or threatened”. Notwithstanding this, the Commission concluded the Irish authorities were in serious breach of the various directives in relation to the protection of wild birds and their habitats.
Ireland has designated 111 SPAs since the Birds Directive came into force, and classified “most of its wetlands of international importance”, the EC’s reasoned opinion notes. However, “serious gaps” remain in the country’s SPA network. In relation to such gaps a review of the country’s Important Bird Areas (IBAs) was carried out in 1999 as part of a wider European study. A total of 140 IBAs were identified. About 60 per cent were coastal and 20 per cent related to lakes and inland loughs. In their May 30th letter the Irish authorities’ indicated that 43 IBAs did not have SPA status.
The Irish authorities indicated that 19 of the 43 IBAs “were in the course of preparation for transmission to the Commission”. The sites concerned included Loop Head, the Sovereign Islands, Clonakilty, Ireland’s Eye, Howth Head, Skerries, Wicklow Head and Helvick: “Notwithstanding these indications, the Commission had not, as of September 20th 2001, received any notifications of classifications in respect of the aforementioned 43 IBAs.”
The reasoned opinion notes a “significant problem of partial classification”, that is a failure to classify SPAs in accordance with ornithological criteria as laid down by case law determined by the European Court of Justice. This appeared to be the result of a “pragmatic approach” taken by the Irish authorities in the period 1994-96 to limit classification to areas in public ownership “and leave out areas seriously contested by economic interests, in particular port-related interests”.
The Bannow Bay SPA, “a sizeable sea bay on Ireland’s south coast containing mudflats and salt marsh” which supports significant numbers of wildfowl and wader species, is a case in point: in 1998 the Commission registered a complaint against Ireland in relation to unauthorised mechanical shellfish harvesting there. In 1995 an application for mechanical cockle harvesting had been refused by the Department of the Marine on the grounds of Bannow’s SPA status. Nonetheless mechanical harvesting commenced without authorisation – on a private foreshore: “Dúchas was alerted but took no action. In December 1997, harvesting spread to state-owned foreshore; this required a licence from the DOMNR.” Despite appeals, says the Commission, neither Duchas nor the Department took any action.
The Commission also expresses concern about “the expansion of aquaculture in the IBA at Lough Swilly”. To the extent that aquaculture licence applications are considered “outside of classified SPA boundaries” for the area, the Birds Directive must be respected, it insists.
The reasoned opinion deals with a number of other developments the EC regards as critical. Big Meadow in Athlone, a housing scheme approved by the local UDC is one example. It forms part of an IBA – beside the Middle Shannon Callows SPA, “the most important surviving Irish habitat of the corncrake, Crex Crex(the TWO WORDS ITALICISED) the only globally endangered wild bird species found in the country”. Because of an administrative error the SPA classification omitted the counties Westmeath and Roscommon and therefore Big Meadow. In July last year, the EC document notes, Duchas withdrew its earlier objections to the Big Meadow scheme. This the Commission finds “inconsistent with the previous position of Duchas confirming the area’s importance”
The Department of the Marine and Natural Resources confirmed last night it had received the reasoned opinion from Brussels and said it expected to frame a reply to it within a couple of weeks. The process of providing the material requested by the Commission was being co-ordinated by Duchas, a spokesman for the Department said.
A spokeswoman for An Taisce said the reasoned opinion was “extremely grave” but came as no surprise. She urged both the Department of the Marine and Duchas to synchronise their efforts to ensure that SPAs were properly classified – and to insist that comprehensive environmental impact assessments, EISs, were carried out in all cases, as statutorily required.