Colman Cassidy hit the Soviet Union in spots on a whistle-stop tour, a few weeks after the Chernobyl disaster in Ukraine, for the Sunday Press.  From Moscow to Alma Ata everything appeared ‘normal’, from rock concerts to Parsi temples… 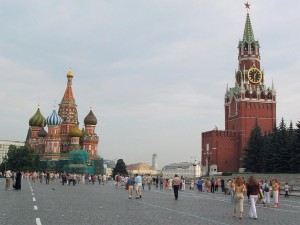 The USSR is a vast expanse which covers a sixth of the earth’s surface.  The flight to Alma Ata in central Asia, 3,300 kms. away – less than 200 kms. from the Chinese border – takes four hours, the same as Shannon to Moscow.   The Aeroflot IL-86 ‘jumbo’ chews up three time zones on the way, so that it is morning when we arrive, with the sun shining brightly through snow-capped mountains, part of the Tien-Shan range which links up with the Himalayas.
Alma Ata is the capital of the Soviet Republic of Kazakhstan, an area the size of western Europe.  The population of only 15 million comprises 30% indigenous Kazakhs (former nomads) and 40% Russians, as well as Ukrainians, Tartars, Koreans. Germans etc.  Most of the non-Kazakhs moved here in the 1950s to help with the republic’s own industrial revolution.
Alma Ata (“father of the apples”, because of the high quality of this fruit grown locally), was originally a small settlement on the Silk Route from China.  The population of just under a million is mixed, but relations, overall, are harmonious.  As well as a major focus for industry, the city is now an important cultural centre of the USSR, with a university, theatres, art galleries, museums and many other centres of learning and culture.
From the start of socialist rule here in the 1920s, the city fathers encouraged the planting of trees – for a marriage, birth, death, divorce, whatever.  There is nothing sentimental about this: mud slides from the mountains travelling, at times, in excess of 60 mph, had destroyed enormous areas of the city in the past – the mountains surround Alma Ata on three fronts.  This programme, together with “the biggest series of explosions in peace time” in the foothills near the beauty spot of Medeo, have made the city safe.

The Ilyushin plant at Tashkent, which builds airliners for Aeroflot, is vast, but not exceptional.  There is a massive variety of industry here including agriculture, mining and engineering of all types.
Elmar, the Intourist guide, is a mine of information.  Masses of cultural data as well as social and economic statistics pour out of him.  He’s even an authority on western pop music, unusual for a Russian.  What he does not know, however, is that Solzhenitsyn had set his novel, Cancer Ward, in a Tashkent hospital – during the spring and autumn of 1951.
The guide, a Party member and the proud grandson of a local military commissar who took an active part in the revolution, considers this particular gem of slight consequence.  Nonetheless, he listens politely while I try to recall what the expatriate Russian novelist had said in defence of his book before his critics in the Writers’ Union, who had seen Cancer Ward as overt criticism of Stalin’s Soviet administration.  And like the Writers’ Union, he remains unconvinced.  This, the capital of the Soviet Republic of Uzbekistan, was the hub of a number of important trade routes from the earliest times – with its own literature from the 15th century. The roads to the Kazakh steppes, Siberia, India, Persia and the Middle East all meet in the city centre.
Tashkent came under Russian Tsarist rule in the 19th century.  Russian political prisoners were sent here to work the farms, as well as to Siberia.  So successfully did they indoctrinate the local Moslem population, that they initiated their own revolution only days after the successful Petrograd revolt in October 1917.  It took seven years of heavy fighting, however, before the Uzbek Socialist Republic was formed.
Modern Tashkent is not the museum-piece of Islamic culture that I’d expected.   That role is reserved for the cities of Samarkand and Bokara, which unfortunately, there isn’t time to see.

Tashkent’s centre was wiped out by an earthquake in 1966 so that little now remains of its Islamic architecture; a notable exception is Kukeldash Madrassah, a 16th century Moslem seminary.
A mammoth rebuilding programme has given the city an entirely modern appearance, which if not exactly ‘authentic restoration’, is still far from disagreeable.
I thought Moscow’s metro must be unequalled aesthetically, anywhere, but the newly built underground at Tashkent is a virtual showpiece.  Each station is a unique ‘palace’, distinctive in its own right, and decorated in local stone and ochre-coloured marble.

Baku
Baku, capital of Azerbaijan, is different. This was the Caucasian oil centre that the Germans tried desperately to capture, to replenish their energy reserves in the war, while pretending their real intentions lay elsewhere.  Onshore, oil is trickling to a halt at last, but there are said to be vast resources of oil and natural gas offshore in the Caspian Sea that remain to be tapped.
On a tour of the old city I run into a television journalist who is making a weekly programme that features the views of foreigners in the Soviet Union.  Alexei Sinitsyn is head of the international department at Azerbaijan TV.  He sports a pair of ‘Lucky Strike’ Guaranteed Quality jeans, outward sign of the intellectual trendy.
Through an interpreter we agree to meet later to put the world to rights.  It proves to be a feisty session that turns into a formal TV interview when he arrives at my hotel with a television crew early next morning.  We discuss politics – human rights, the prospects for world peace, my impressions of the USSR, Chernobyl and lots besides.
To my surprise, Alexei readily agrees that the early news handling of the nuclear holocaust in Ukraine has been a disgrace – way down the list of priority news items each evening and only on the inside pages of the newspapers.  As more information has trickled through, he says, the feeling of tragedy has mounted.
I argue, tongue in cheek,1)cf. Conclusion in Semiotics article on this website, http://colmancassidy.com/semiotics-public-language-northern-ireland-the-printed-word/ that the western journalist has a much greater chance of saying what he or she wants compared to a Soviet counterpart.  He disagrees in general, while allowing that he himself, as a Party member, would certainly take the definitive line on particular subjects.  He doesn’t flinch when I suggest that Mikhail Gorbachev’s excellent television profile has done much to remove the Jewish ‘refusenik’ question from western consciousness.  He takes grave exception, however, to my assertion that European Russia has lost much of its identity (such as Russian Orthodoxy), while the Moslems, in the main, have managed to entrench their cultural identity, in spite of the Revolution; and Russian ‘intervention’ in Afghanistan might not be too different from the USA’s imperialist stance in Central America.  Russia only went in when invited, he insists.
Next day I learn that Alexei has done his national service in Afghanistan, when he says to me in broken English: “I have slaved in the Soviet Army in Afghanistan.  Have you slaved in the army?”  I am forced to admit I have not.  The crew direct me to a beach a short distance away where it is possible to swim in the Caspian Sea, in relatively clean water, despite the presence of oil derricks a few hundred yards away.  My progress, it appears, is being monitored, and I recall the words of the English engineers back in Moscow when two men in a brown-coloured car drive off noisily as I emerge from the beach, one ostentatiously wielding a camera.
In hindsight, two of the most memorable features of Azerbaijan were the Parsi fire-worshippers’ temple and its fascinating history and a vist to the desert site of pre-historic cliff drawing at Gobustan, dating from 7,000 B.C. – some 40 kms. from the Baku.

The guide at Volgograd (Stalingrad) is rigid with indignation when I indicate that this very day, 6 June, is the 42nd anniversary of the opening of the Second Front – D-Day.  “They certainly took their time,” she says, referring to the 1944 invasion of Normandy by the Americans and British some three years after the Russians had stood up to everything the Germans had thrown at them, mainly at this place, Stalingrad, on the great artery of the Volga.

The Volgograd War Museum is breath-taking in its scale.     The Russians make no apology for this.  For them the Great Patriotic War in which they lost 20 million and ultimately defeated the ‘Fascists’, was their finest hour.   The symbolism carved out on rock is penetrating, as are the stories of individual heroes and heroines, so poignantly represented.
Here the changing of the guard does not leave the outsider untouched, as in Moscow.  Inside, the enormous underground chamber that contains the Eternal Flame, together with the long lists of fallen heroes, provide an emotive testimonial. The real tear-jerker, ironically, is the German composer, Robert Schumann, who once wrote: “To send light into the darkness of men’s hearts, such is the duty of the artist.”  His music at Stalingrad, ensures that everyone present, Russian and non-Russian, is a full participant.