The McDevitt sisters, from Donegal are “breaking in a brand new broken heart”, courtesy of Connie Francis, on the car radio, when I hit the brakes.  The first sighting of Croagh Patrick on the road General Humbert took in 1798 from Killala to Castlebar, is something to savour, this pristine blue morning.
Watercolourists shun all contact with the real world, sometimes for weeks, when the light is like this.  It’s the ‘Gay Byrne Hour’ on the radio.  The programme is coming from Bad Bob’s backstage bar at the Olympia theatre in Dublin.
Gaybo is hosting a country and western singing competition.  He purrs at his guests, the McDevitt sisters: Collette’s a teacher and Una is doing her finals in accountancy. The prize is a trip to Nashville and a recording contract.  There’s no FM button on the car radio to zap to Raidió na Gaeltachta.
The song has interrupted my musings at the incongruous sight of anglers tripping over each other at Pontoon Bridge to fish for trout and salmon in Lough Conn and Lough Cullen.  Further south, on Lough Mask and Lough Corrib not a line is cast as the rod licence war cranks into high gear for the dying days of the election.
Croagh Patrick, overlooking the island-studded Clew Bay, just out of eyeshot, is the most seductive mountain in Ireland – and not just for artists.  It’s nearly five years since Tara Prospecting discovered there was gold in its quartz-filled contours.
Tara, now owned by the Finnish company Outokumpu, did little about it, until 1987 when it formed a joint venture with Burmin Exploration – whose managing director is Tuam-born, Des Burke, once one of their own geologists.  Burke is a former Cistercian monk.  His tonsured head still bore the giveaway marks of an enclosed religious order when he first joined Tara.  That was as a fledgling prospector, in the mid-Sixties.  Twenty years later, with the fate of Tara in the balance, and a full head of hair, he was fed up and hungry for action.
He knew the UCD lecturer/entrepreneur, John Teeling, who acted as a business consultant to the Navan mining company.  Teeling introduced him to Donal Kinsella. Teeling and Kinsella, the Dunleer, County Louth hotelier and former Dublin Gas director, were of course, the dynamic duo that wreaked havoc on Irish business susceptibilities in the 1970s, with their controversial asset-stripping tactics.
In any event, Kinsella and Burke roped in banker Michael Murphy, the former AIIB head and noted Fianna Fáil financial strategist, along with Alan Chambers of the Dublin car firm, Murphy Chambers, as fellow directors, and headed west.
With them they took Pappy O’Rourke, one of the prospectors who was around when Tara first encountered Croagh Patrick’s interesting possibilities.  O’Rourke is a Clareman with a formidable reputation for being able to spot “something queer” in rocks.
It turned out that pilgrims to the Reek, Ireland’s holy mountain, where Patrick is said to have spent the 40 days of Lent in the year 441, have been treading on gold for centuries.  Soon after publication of Burmin’s 1987 annual report, last year a spokesman for the Geological Survey division of the Department of Energy told this reporter: “It’s quite exciting that there are signs of gold near Croagh Patrick on a scale not even to be found in the Sperrins.”  The Sperrins find in County Tyrone, was the catalyst that sparked off the current round of gold fever in Ireland.  Around Killary Harbour to the south, a Glencar-Andaman consortium has discovered what are thought to be major gold reserves.  And between that find and Croagh Patrick, Feltrim Mining, headed by Conor Haughey, the Taoiseach’s son, is also feverishly searching for gold.
The perceived amount of gold from Burmin’s explorations is roughly 250,000 ounces, worth over $100 million at current prices.  To recover it, however, means it has to be extracted from some half a million tons of ore.  And that, say the environmentalists, means the company has to use cyanide, or other lethally toxic substances.
Mining Awareness, the group which started the anti-mining campaign in Mayo, did its homework well.  The Fianna Fáil senator, and chairman of the county council, Martin Joe O’Toole, from Louisburgh, is a near neighbour of one of its leading lights, the American-born Lesley O’Dowd.
An operation such as Croagh Patrick, they are advised by world experts, would involve the mining and quarrying of hundreds of thousands of tons of rock.  This crushed rock in the form of slurry, is subjected to a series of treatments to recover the gold.  Usually, it is concentrated first by gravitation or flotation techniques. Cyanide has been almost universally used to extract gold from this concentrated mass for 90 years. It can dissolve large quantities and gives a greater gold recovery rate than other chemicals.
Gold mines are normally found in desert-type environments, the Mining Awareness people point out, and the technology has evolved to suit these conditions.  Cyanide is therefore a potentially enormous environmental threat because of the high rainfall around Croagh Patrick, in particular the risk of spillages and consequent threat to human and animal health, fisheries and wildlife. The silting of streams would be another threat with major consequences for water supplies and fish spawning. 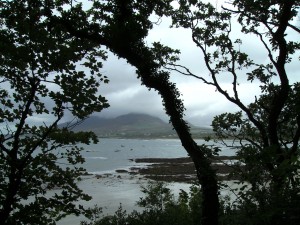