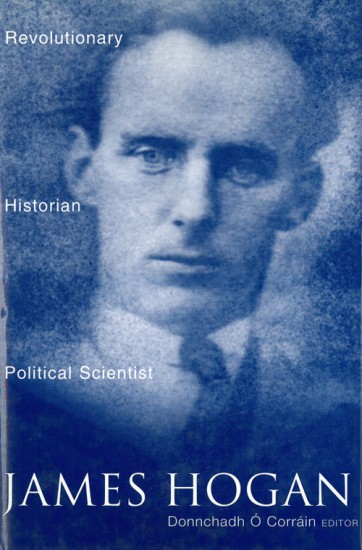 The synoptic approach adopted in this book makes James Hogan – the Cumann na nGaedheal intellectual and frustrated “puppet-master” who sought to mould the neo-fascist Blueshirt leader Eoin O’Duffy in the national interest – accessible for a wide readership. It manifests as a combined and comprehensive critical overview by a select band of academics – among them distinguished former students of Hogan such as Margaret MacCurtain and John A. Murphy, and the book’s editor, Donnchadh Ó Corráin, currently professor of medieval history at University College Cork.

The book’s genesis may be traced to a commemorative conference in 1998 to mark the centenary of his birth where five of the essays were first read.  Its synoptic quality derives from these, plus the six or seven papers written specially for inclusion here.  Some of the best nuggets, however, are to be found in the prime source material reproduced, including Hogan’s personal memoir – as an addendum to the critical analysis of his published works and dearly held opinions: communism was at all times an abomination, for example, and neither was he comfortable with coalition government, or PR-STV as an electoral system.  It divided parties “as sharply as possible from one another”, he maintained, while participation in coalition encouraged them to develop policies without assessing the concessions that must ultimately be made to partners in government.

Hogan made the grand evolution from the schoolboy with a quaint predilection for the Irish language in the “altogether British in tone” Jesuit-run Clongowes Wood of his day (1910-15) described in his memoir, to volunteer in the War of Independence – ultimately to serve as director of intelligence for the national army during the Civil War.  But before that, remarkably, he was appointed to the Chair of History at UCC as a precocious 22 year old.  His preferment for such a senior academic post on the basis of an unpublished MA thesis was to be thrown in his face a decade-and-a-half later by the redoubtable Mary McSwiney, one of those who had supported his candidacy.  Hogan had attacked McSwiney in the pamphlet “Could Ireland Become Communist?” written as a jeremiad against communist infiltration of nationalist organisations such as the IRA.  She denied that either she or the IRA had any truck with communism.  Her appearance at meetings chaired by Peadar O’Donnell, who Hogan termed “a leading communist agitator” was sufficient circumstantial evidence – even though O’Donnell riposted that he himself was no more a communist than Liam Mellowes.  Hogan viewed the Republican Congress, established by O’Donnell and George Gilmore in 1934 to take the gun out of Irish politics in the tradition of Michael Davitt, as, in reality, a front for communism.

Yet, unlike some of his War of Independence contemporaries whose academic careers had advanced exponentially through patronage only to atrophy, Hogan had a genuine capacity for intellectual growth.  On one level he is “the shadowy figure of Irish politics”, as one contributor, Maurice Manning, sees him.  He appeared on the public stage at intervals, but left few footprints – unlike his brother Patrick, an able Cumann na nGaedheal minister for agriculture.
His initial hopes for the mercurial O’Duffy as a force for real change were fated to end in tears.  At the centre of his thought, however, Ó Corráin argues, was the perennial problem of the complex relationship between ethics and the coercive power of government: how is government itself to be restrained – quis custodiet ipsos custodes?  Hogan’s life is a reminder of just how fragile – and recent – liberal democracy is in Ireland.  He became a full-blooded convert only after the Second World War, believing that the necessary ingredient for government, the consent of the people, could operate more efficiently under non-liberal regimes.  His early experiences during the precarious formation of the new Irish state moulded his worldview considerably as he searched for the best formulae to deliver stability. Military rule was not an option as his submission as director of intelligence shows before the “army mutiny” inquiry, in 1924.  Ultimately, he was no fascist and viewed totalitarian regimes, such as Stalin’s communism and Hitler’s national socialism, as iniquitous sides of the same coin.

He espoused the “corporativism” closely linked to Pius XI’s 1931 encyclical, Quadragesimo Anno, a view not dissimilar to the neo-corporatist arrangements current in Ireland since the 1987 Programme for National Recovery.  He imbibed, as well, the “respectable” Catholic suspicion of democracy emanating at this time from the Vatican.  The convulsions wrought by totalitarian regimes convinced him after 1945, however, that liberal democracy was the best way.

Hogan’s most mature published work, Election and Representation, was reviewed by Sean O’Faoláin in The Bell in 1946.  While his status as a scholar and intellectual were acknowledged, his views on a range of issues – political, literary and ethical – were anathema to O’Faoláin and O’Donnell, who succeeded him as editor.

O’Donnell, who had hoped to raise money in the USA to keep the journal going, blamed Hogan, among others, for the fact that he could not get a visa.  Elsewhere, however, the book was well-received as a worthwhile contribution to political science.

Early promise of Hogan’s later flowering as an intellectual was first displayed in Ireland in The European System: 1500-57, his work on Tudor Ireland.  For Margaret MacCurtain it was a seminal book on 16th-century Ireland, “an extraordinary accomplishment for a young man of 21, while on active service in the War of Independence.”